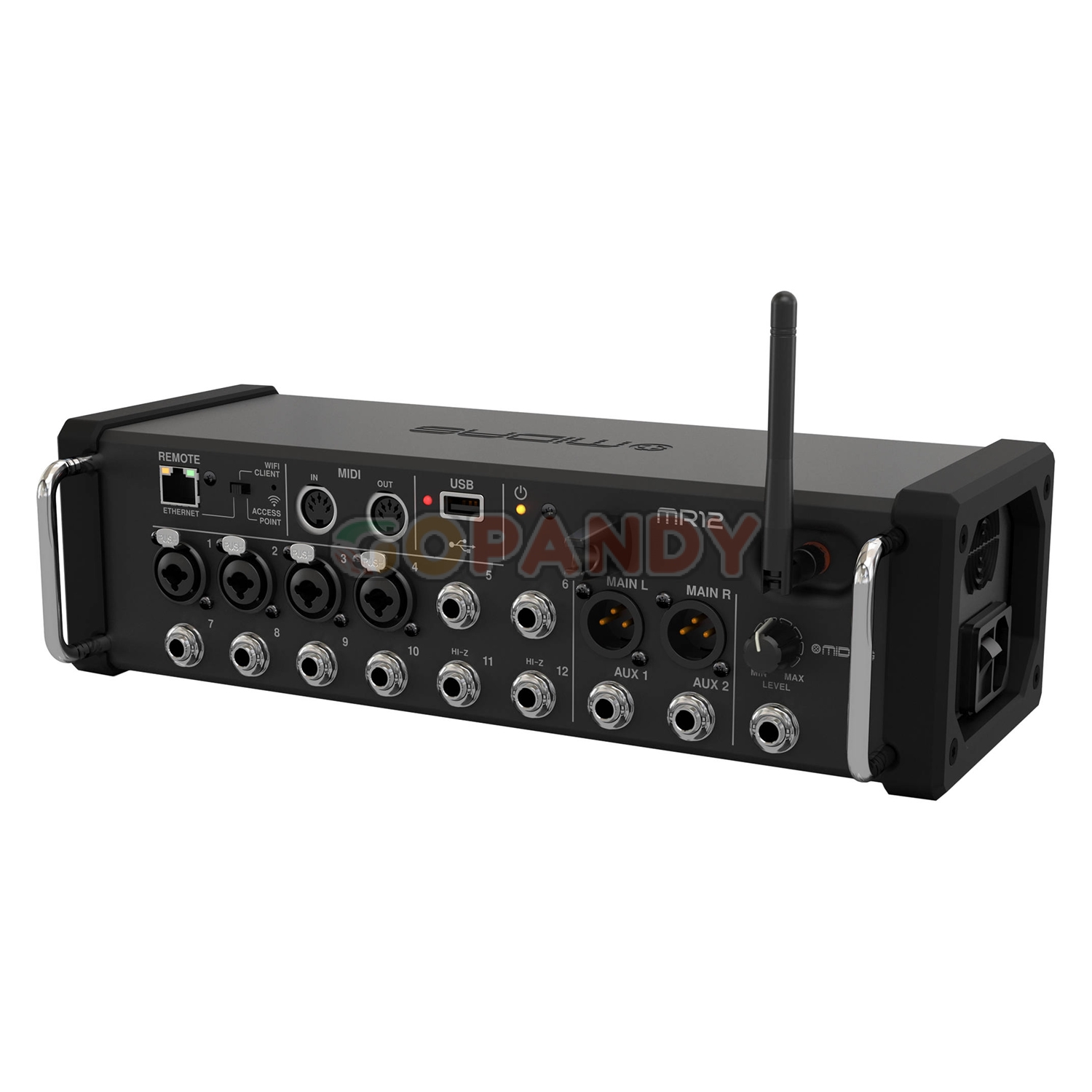 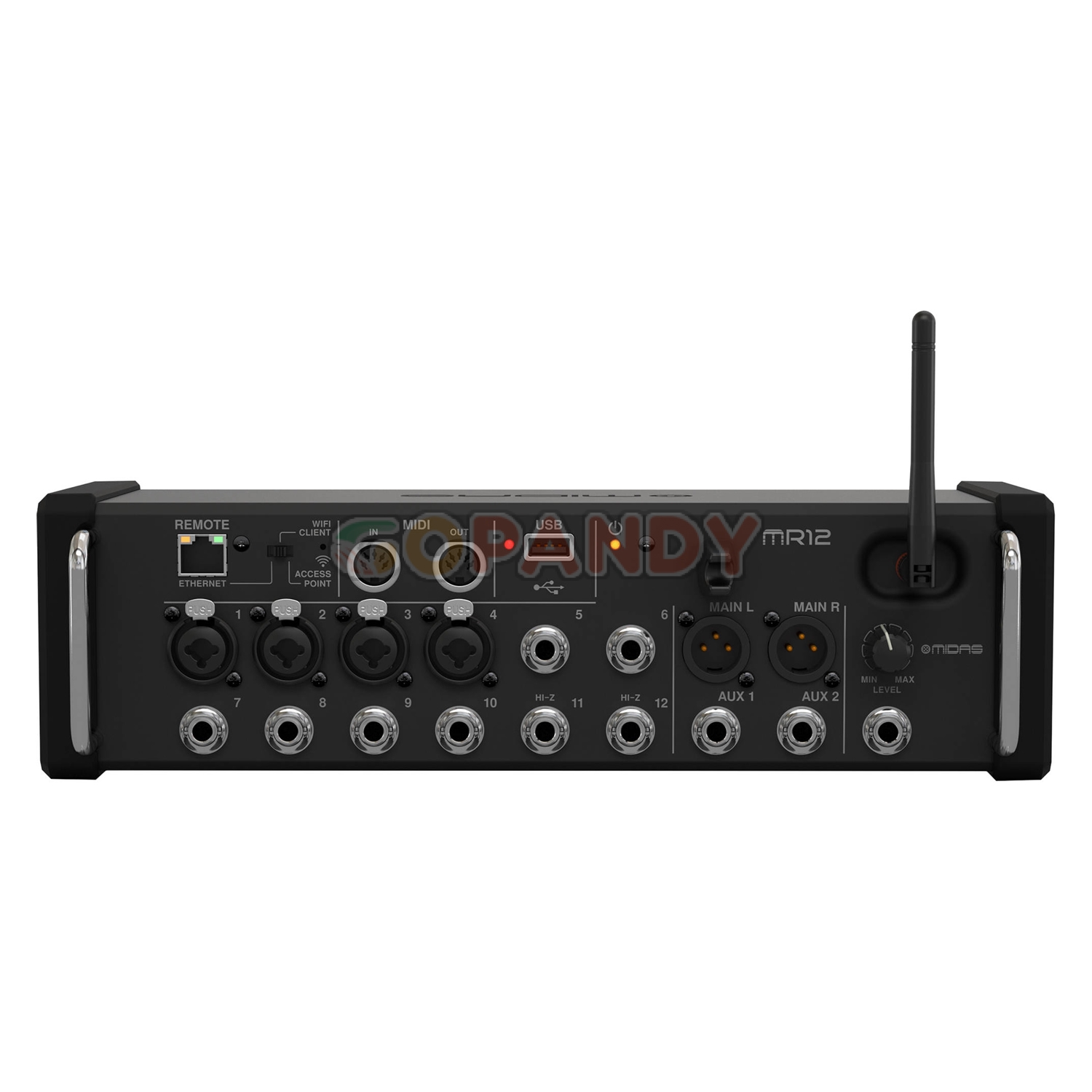 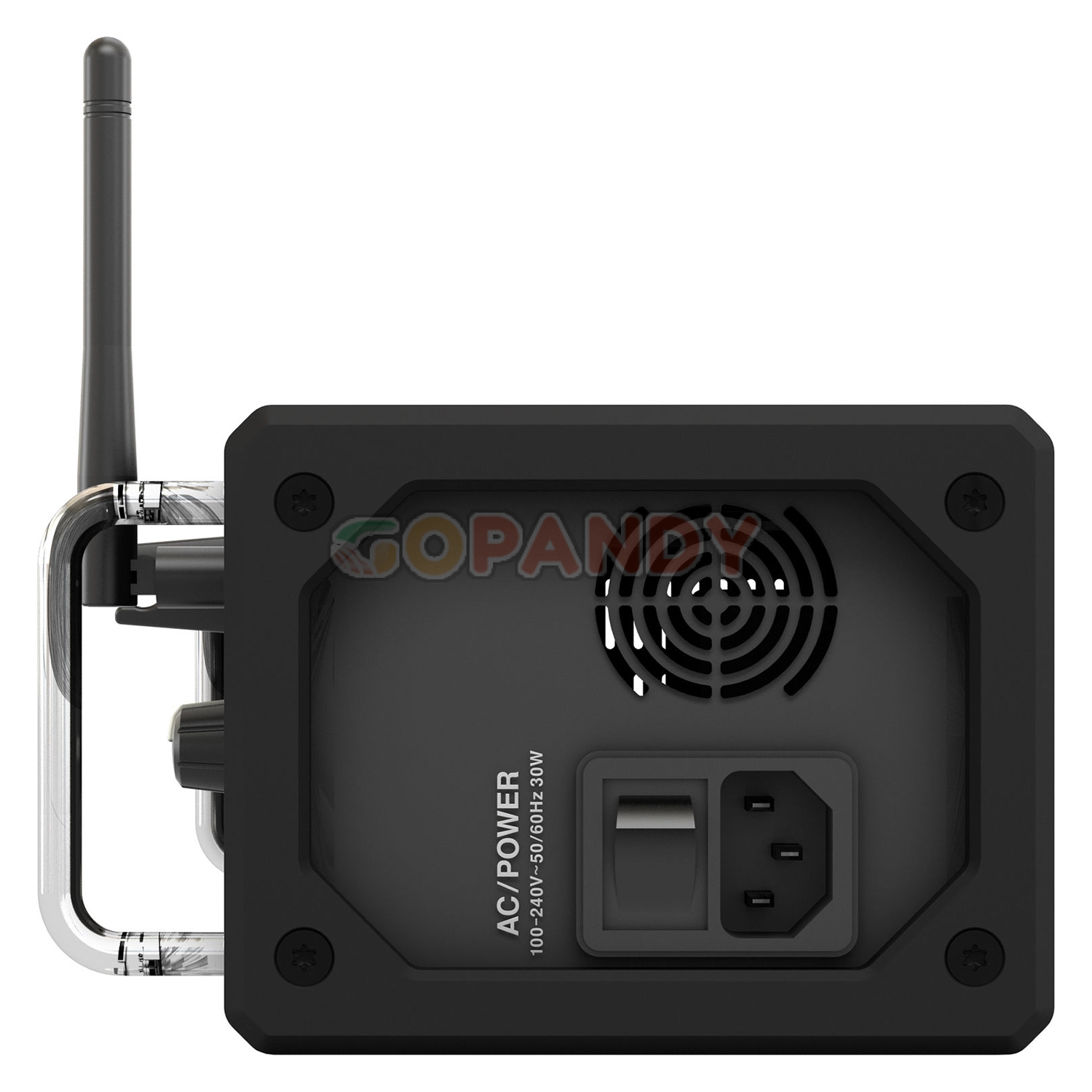 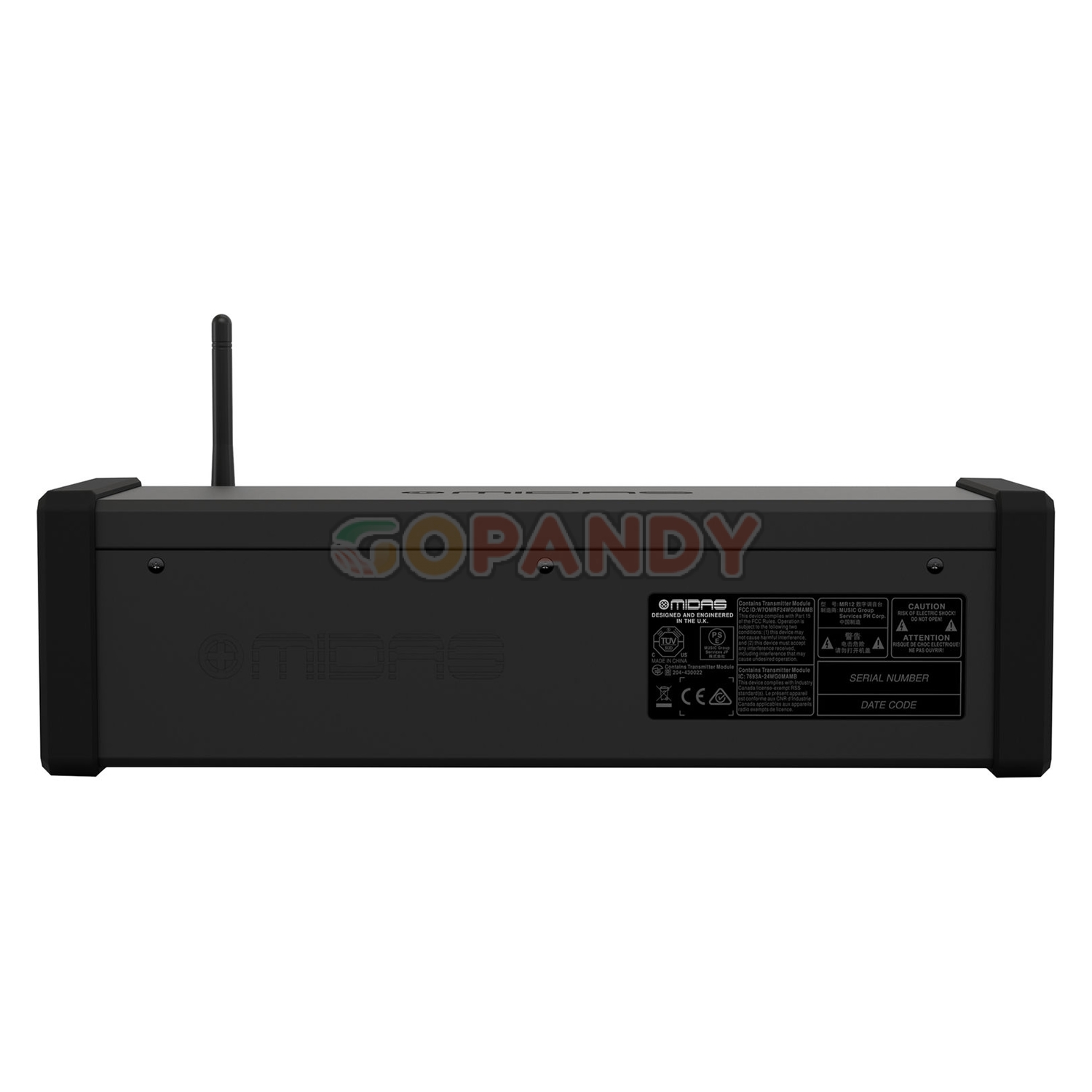 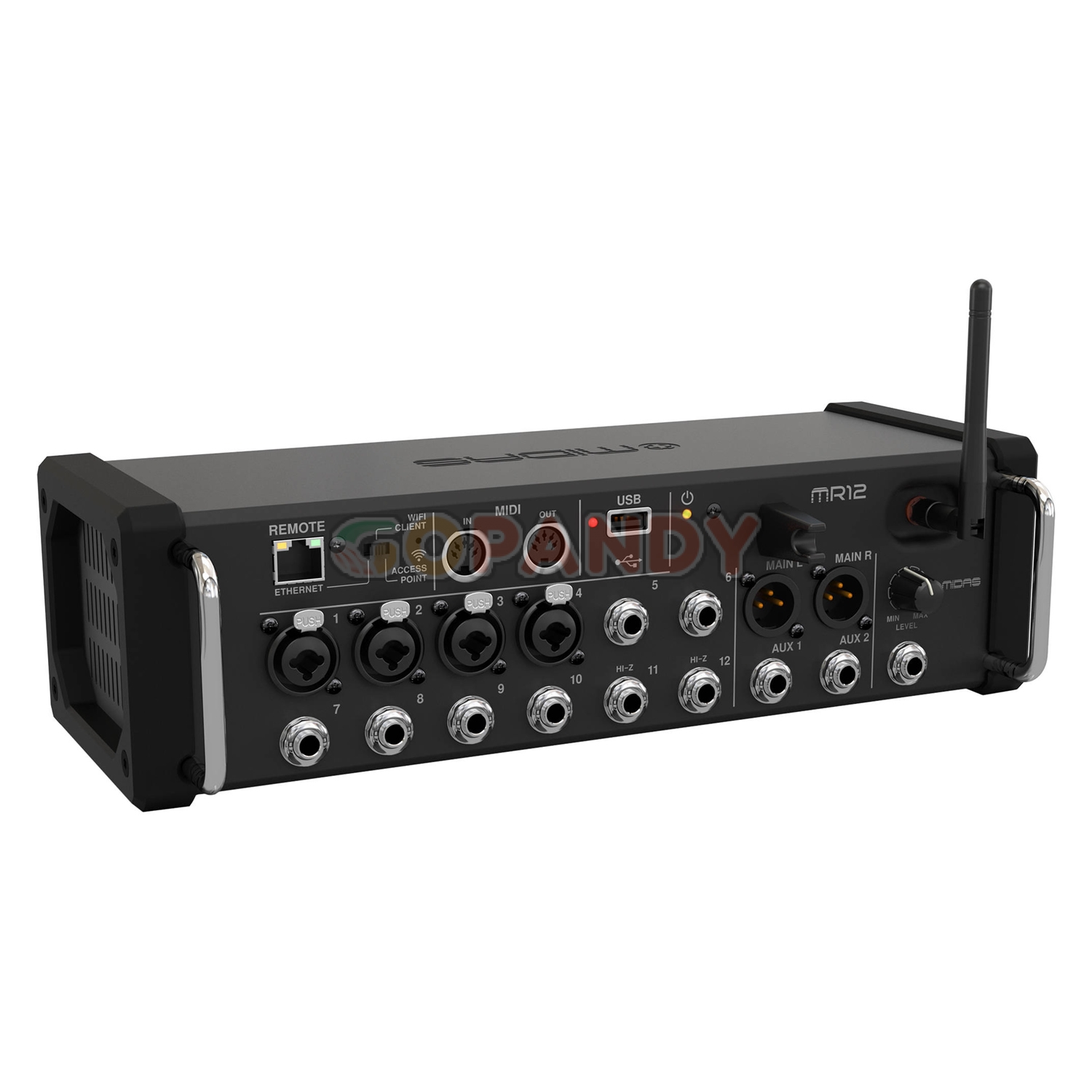 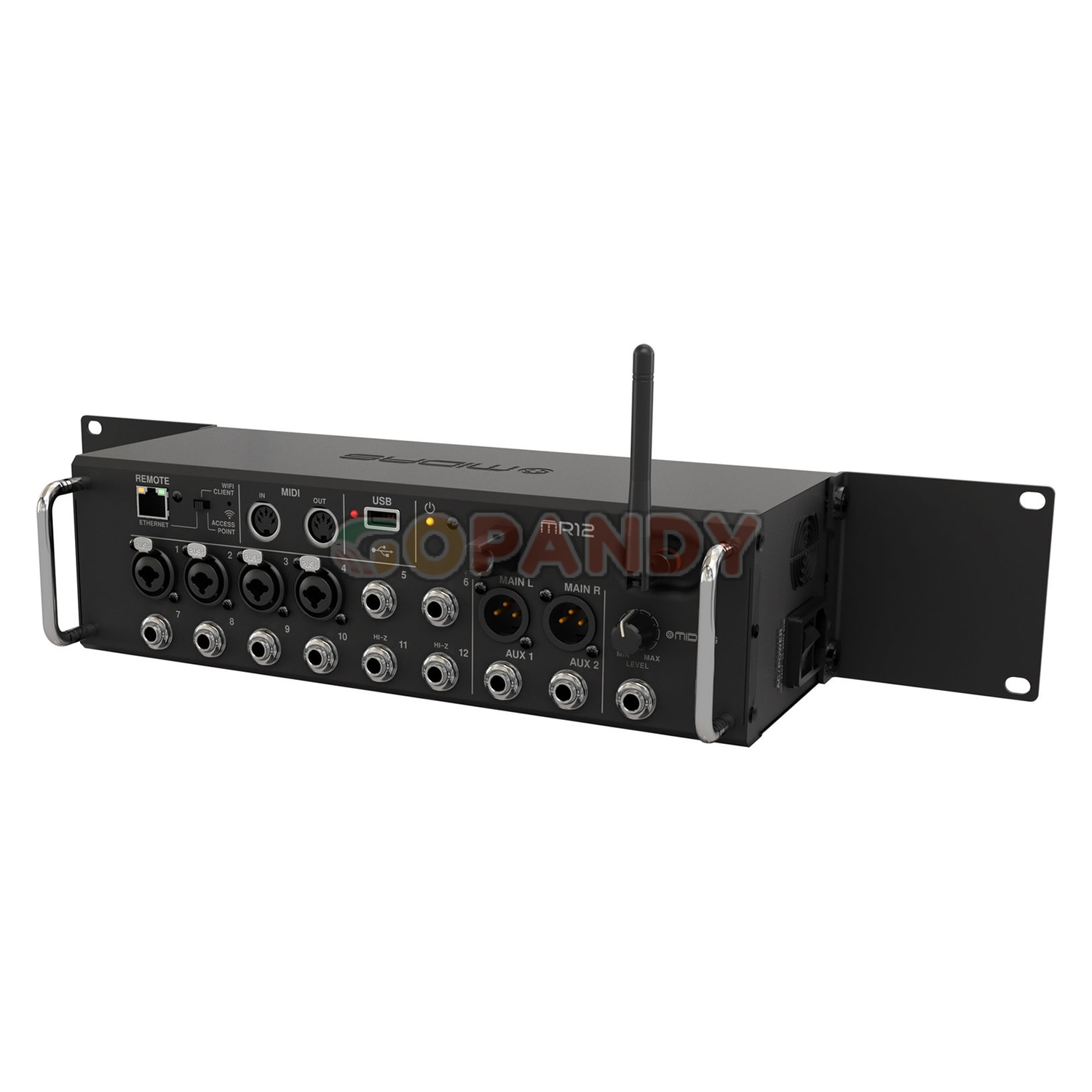 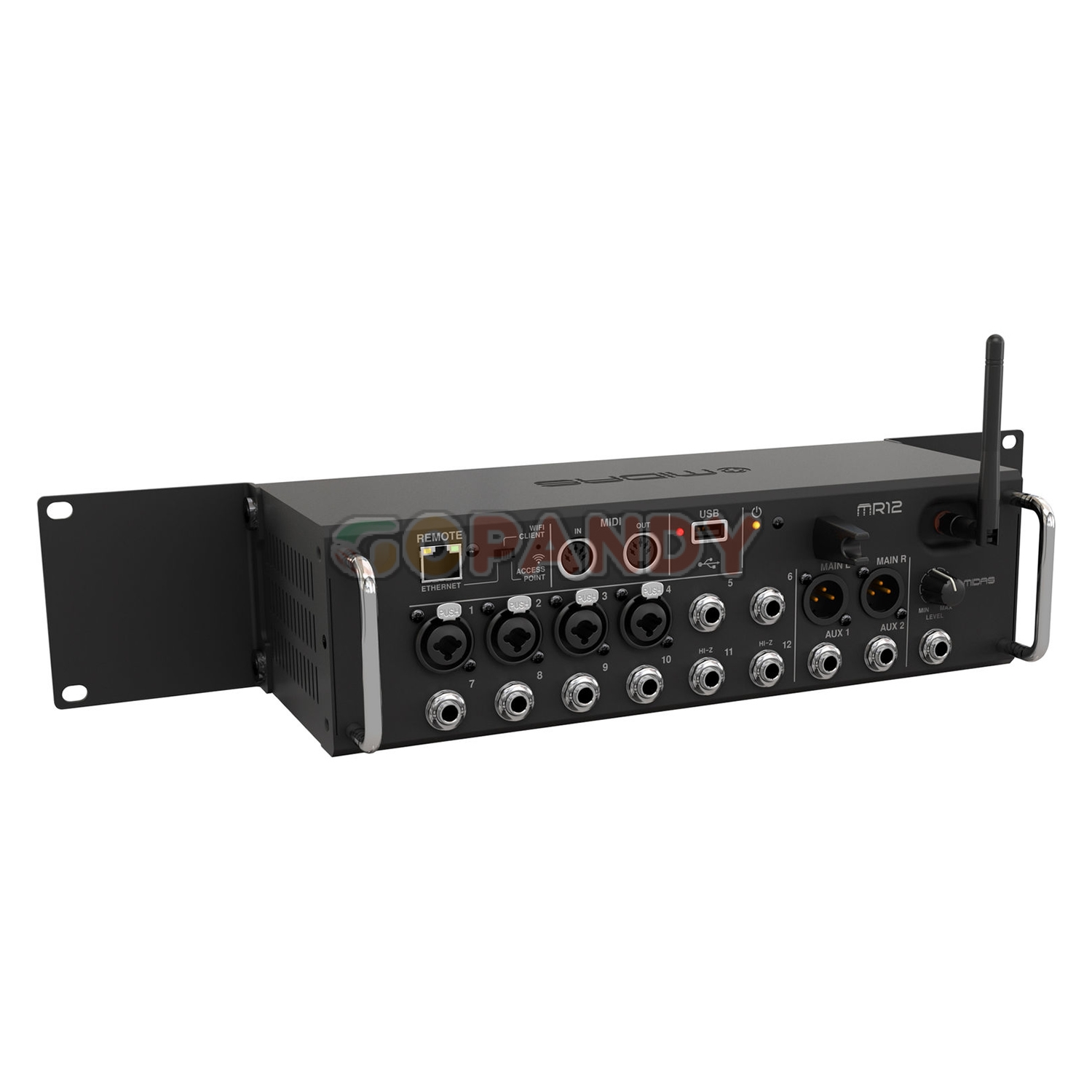 Add to Wishlist
SKU: A17622 Category: Digital Mixers Tags: digital, Gifts For Her, Gifts For Him, mixer, performance, recording, studio
Share this product

The Midas MR12 Digital Mixer features a 12 channel design with an integrated Wi-Fi module which provides complete wireless control via iOS and Android devices. Ideal for performance venues and recording applications alike, the MR12 can accommodate up to four microphones, six line level sources and two instruments. Additionally, the Midas MR12 has USB connectivity that allows you to directly record performances and playback uncompressed WAV files. The onboard stereo processing engines provide studio-quality near-zero latency effects and provide you with access to an extensive range of faithfully modelled processors. The MR12 digital mixer comes supplied with rack ears and protection bumpers.

The Midas MR12 mixing console is equipped with four award-winning MIDAS PRO microphone preamplifiers. Originally designed for the PRO series consoles and also utilised within the M32 mixer, these preamps are regarded by live sound and recording engineers world-wide as the key to achieving the legendary Midas sound. Crafted using premium-grade components, the MR12 mixer delivers exceptional warmth and clarity, with an exceptionally accurate sonic image.

Based on the iconic Dan Dugan automix system, the MR12 console incorporates a state-of-the-art M AIR Gain Sharing Technology which can be used to maintain maximum gain without sacrificing audio integrity. Suitable for up to four microphones, the MR12’s auto mixing technology automatically controls the levels of the selected microphones in real time without gating artefacts or noise modulation. Additionally, the auto mixing helps to eliminate problematic feedback, studio noise and comb filtering that often occur when multiple microphones are positioned in close proximity.

The Midas M12 digital mixer features the same FX engines as the highly regarded M32 digital mixing console. Providing four true-stereo processors, the M12 has the ability to run studio-quality true-stereo reverbs in conjunction with a 31-band EQ on the main and aux buses. Any combination of the custom-designed and physically modelled effects can be selected, such as the Lexicon 480L and PCM70, as well as the EMT250 and Quantec QRS reverbs. Delivering ultra-low latency performance and intuitive operation, the MR12 mixing console offers superior creative possibilities and allows you to add a new dimension to any performance or production.

The integrated tri-mode Wi-Fi router enables you to connect to the MR12 directly without the need to setup and configure an external router. Providing freedom and flexibility, you can control every aspect of the mix from anywhere in the venue and ensure the best possible performance for both the audience and artists. Up to four iOS or Android devices can be connected simultaneously, allowing sound engineers to adjust stage monitor levels and artists to created their own tailored IEM mixes.

The MR12 digital mixer features a USB connector which allows you to easily recording and playback uncompressed stereo WAV files. Suitable for both studio sessions and capturing live performances on stage, the Midas MR12 provides zero-latency monitoring while recording up to 12 source signals. Additionally, the MR12 provides the ability to send MIDI notes to your DAW software for both recording and editing.